Scorpions are not usually anyone’s favorite insect. They are usually very feared because of their sting which can cause mild to extreme pain, or in some cases, death. What happens is determined by the scorpion species, the body mass of the victim, the amount of venom injected, and the individual person.In the lakeside area, there are two families of scorpions – Buthidae and Vaejovindae. The genus of Buthidae in Mexico are called Centruroides, and northern Mexico has some dangerous ones. Lakeside,  there are less dangerous species such as centruroides infamatus or centruroides elegans. The other family here is Vaejovindae, and its many species of the genus vaejovis. Most people cannot identify local scorpions because they have more similarities than differences. However, generally the more poisonous scorpions have smaller pincers that have less muscle force, and require a more venomous toxin to kill its prey. The species of Centruroides found here have slightly smaller pincers than Vaejovis, and thus a stronger toxin. Fortunately, if you are stung here, statistics show it will probable be by a species of Vaejovis.How much poison is injected depends on the situation. A scorpion needs poison to defend itself and to kill its prey. Using all of it just to sting you is not in its own interest. If you just bump it, it will likely not sting with all its venom. If it is trapped in your pant leg, shoe, etc, it will sting to try to save its life, and may give you all it has. If it has already stung, it many not have had time to regenerate more toxin, and will not be as dangerous.Scorpion poison is a neurotoxin, and can work by either retarding inactivation (an α-toxin) or enhancing activation (a ß-toxin), both leading to spontaneous depolarization of excitable cells (nerves and muscles). Nerves are “short circuited” to send pain signals of a problem that does not really exist (there is no real skin burn, just the sensation). In small children, muscles can move in limbs, face and eyes from the action of the toxin on the nerves and muscles. Although the heart could be directly affected, this would be very rare from a scorpion here. Both sympathetic and parasympathetic systems are involved, so the person could have hypertension or hypotension, hypersalivation, or even priapism in severe cases. In most adults, important symptoms are from nerves controlling the mouth and throat. The most dangerous effects are those that inhibit the ability to breath, either by airway obstruction, or by respiratory failure. Allergy to the toxin is also a possibility, as is allergy to the anti-toxin. Symptoms are usually evident in the first 15 to 45 minutes, although rare atypical symptoms can be delayed as much 5 to 8 hours. Classic lakeside symptoms are extreme pain in the area stung, and clinically important cases will have an unusual sensation in the throat. 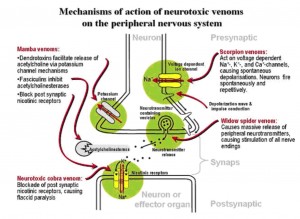 There are many treatments, but few work. I have seen grease, garlic, bleach, etc. Pain medications (NSAIDS) are not very effective. Opioids could potentiate vomiting and respiratory depression. Antihistamines (very commonly used) will mask the symptoms. Local injection of anesthesia will resolve the some pain, but rarely done. If the symptoms include an unusual sensation in the throat, an anti-toxin called Faboteropico may be necessary. Faboteropico is a Mexican invention from 1994, and was finally approved by the FDA in 2011 http://www.bioclon.com.mx/bioclon/pdf/Anascorp_DB_study.pdf
http://www.bioclon.com.mx/bioclon/html/home_en.html
It is a purified and modified antibody treatment. It is widely available through the Secreteria de Salud. It is available locally at both the Chapala Cruz Roja and the Chapala Municipal Clinic. At this time, the Secreteria de Salud supplies it free of charge, but in the near future it may good for the person to have Seguro Popular because the cost to the SSJ to supply it is in the millions. The cost from a private consultorio or clinic can be around $1200 mxn. per dose. Some cases can use up to five injections, although the average is just one.Many people take antihistamines, specifically cloropiramina (Avapena). It will mask (not resolve) the symptoms. If you are in the wild, with no doctors, clinics, etc. and the only hope you have is a Farmacia Guadalajara for the next 400 kilometers, you can try it. Unless you have uticaria (hives) or signs of an alergic reaction, it will do no good. Most people, and many doctors, associate the “closing” of the throat to an alergic reaction, when in reality it is usually caused by altering the control of cranial nerves 9, 10, 11, and 12 that control the mouth and throat. However, if you take an antihistamine, then come to a clinic, you may have done more harm than good. In order to give Faboteropico, you need to have moderate to severe symptoms. If you mask the symptoms, and only have slight symptoms, you may not get the treatment you really need.There is not much you can really do yourself. Putting ice packs indirectly on the area will lower the pain some, as well as very slightly retard the absorption of the toxin (by vasoconstriction).To have scorpions in your house, you need two things – an entrance and food. Screens and door seals are important, as well and not having other insects in your house for them to eat.